As indicated in a previous post that compute, storage and network are the 3 main building block of OpenStack.

In the beginning of OpenStack, networking is under the Nova project - nova-networking.  It served its needs to support OpenStack when OpenStack is still in the infant state.  Later on as OpenStack becomes more mature, the need to for a more flexible and "powerful" networking module is required.  Nova-networking is found to be limited in selection of possible network topology, and most of all it cannot utilize third party solutions.  Nova-network can only uses Linux-bridge, limited network type and iptable to provide network services for hypervisor in Nova.  Capability of nova network can be found here.

A new and separate project is incubated and then integrated into OpenStack for networking.  It was initially named Quantum but due to conflict of an existing commercial product, the project is renamed Neutron.  Some of the older documents for OpenStack still reference Quantum as the networking service.

The OpenStack Networking components are:

neutron server (neutron-server and neutron-*-plugin)
This service runs on the network node to service the Networking API and its extensions. It also enforces the network model and IP addressing of each port. The neutron-server and plugin agents require access to a database for persistent storage and access to a message queue for inter-communication.
plugin agent (neutron-*-agent)
Runs on each compute node to manage local virtual switch (vSwitch) configuration. The plug-in that you use determine which agents run. This service requires message queue access. Optional depending on plugin.
DHCP agent (neutron-dhcp-agent)
Provides DHCP services to tenant networks. This agent is the same across all plug-ins and is responsible for maintaining DHCP configuration. The neutron-dhcp-agent requires message queue access.
L3 agent (neutron-l3-agent)
Provides L3/NAT forwarding for external network access of VMs on tenant networks. Requires message queue access. Optional depending on plug-in.
network provider services (SDN server/services)
Provide additional networking services to tenant networks. These SDN services might interact with the neutron-server, neutron-plugin, and/or plugin-agents through REST APIs or other communication channels. 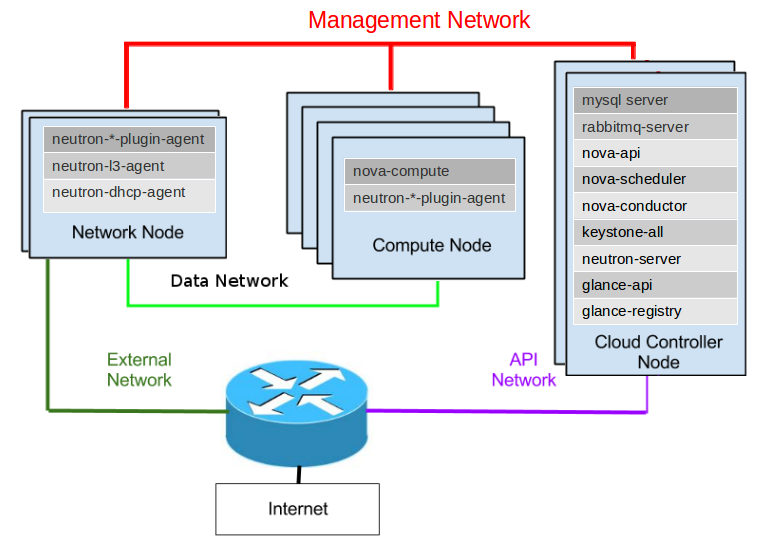 Neutron Plug-ins
Plugin is the interface between Neutron and the back-end technologies such as SDN, Cisco, VMware NSX so that the consumer of Neutron can take advantage of these 3rd party networking equipment or software.

A comprehensive list of Neutron plug-in can be found here and here.

One plugin that is not directly related to the 3rd party vendor but is a very important plugin is the ML2 (Modular Layer 2) plugin that is introduced in the Havana release. This plugin allows concurrent operations of mixed network technologies in Neutron. 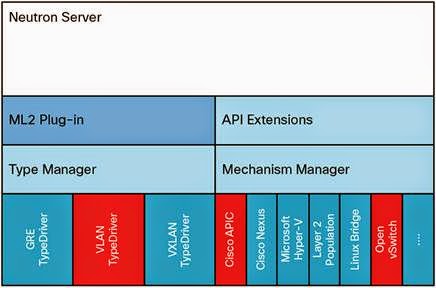 image source: http://www.cisco.com/c/dam/en/us/solutions/collateral/data-center-virtualization/application-centric-infrastructure/guide-c07-732454.doc/_jcr_content/renditions/guide-c07-732454_0.jpg
Without the ML2 driver, Neutron can only provide one type Layer-2 service because the operation is monolithic.  ML2 has the concept of driver Type and driver Mechanism.  ML2 by itself can be a blog post. Will post more in the coming days.

There are a lot more to talk about for Neutron.  Will cover more Neutron related topics in the future.  For now this IBM document is a good comprehensive article on Neutron.