These drivers are fully supported. Test coverage includes:
Drivers in this group include:

These drivers are in a bit of a middle ground. Test coverage includes:
Drivers in this group include:


These drivers have minimal testing and may or may not work at any given time. Use them at your own risk. Test coverage includes:
Drivers in this group include.
NOTE: Drivers in Group C will be deprecated by the Icehouse release. See DeprecationPlan for details.

I think the hypervisor technology is the most matured for VMware's ESXi/vCenter Server.  However, user has to pay licensing fee.  On the other hand, KVM is free with Linux and is becoming more and more "enterprise ready".  Of course if we compare the feature between VMware, KVM the number will favor ESXi.  We have to take into consideration that not all the features are necessary for most enterprise requirement and user will have to decide which hypervisor has the best ROI (Return on Investment).

The Nova Developer Guide has a good description of the sub-components that make up of Nova services:
Nova consists of seven main components, with the

Scheduler selects the most suitable compute controller to host an instance.

This diagram shows the inter-relationship of the different Nova components. 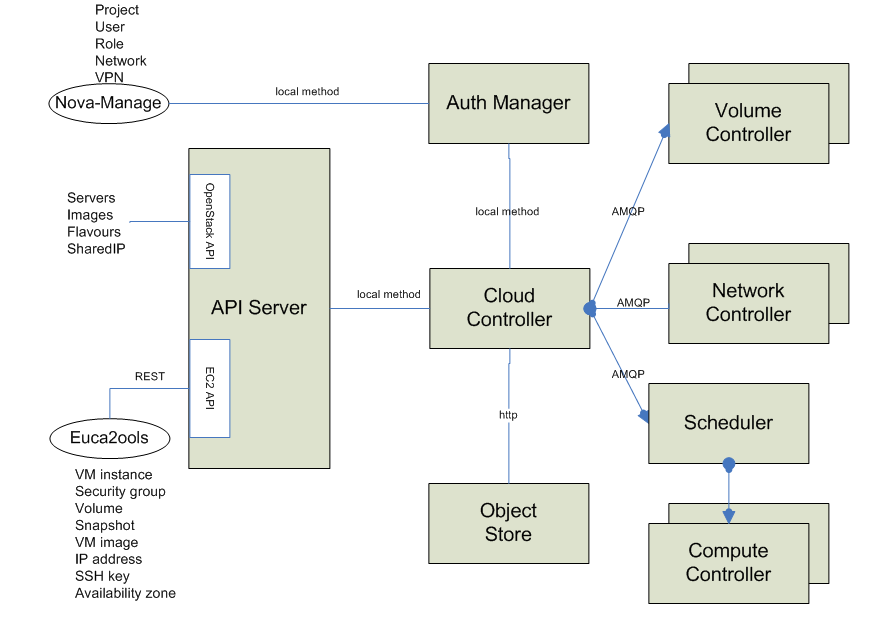 Please note that Message Queue and back-end database are also vital to the operation of Nova.

For Message Queue, it can be any AMPQ message queue but the more popular ones used by OpenStack are RabbitMQ, Apache Qpid (used by Red Hat OpenStack) and ZeroMQ.

For back-end database, the popular used in OpenStack are sqlite3, MySQL or PostgreSQL.

An article by Ken Pepple describes Nova very well in three sentences along with a diagram:

This complicated, but not overly informative, diagram as it can be summed up in three sentences:
- See more at: http://ken.pepple.info/openstack/2011/04/22/openstack-nova-architecture/#sthash.I0qjs82T.dpuf

This is only an brief introduction for OpenStack Nova.  There are a lot more in OpenStack Nova that we can look into and I will share more on this topic in the coming days.