Project Goal/Objective
The Ceilometer project was started in 2012 with one simple goal in mind:to provide an infrastructure to collect any information needed regarding OpenStack projects. It was designed so that rating engines could use this single source to transform events into billable items.

Note: Billing involve 3 steps metering, rating and billing.  Ceilometer only deals with metering.  Application will have to be build on top of Ceilometer to perform the complete billing process.


As the project become mature a secondary goal is added: become a standard way to collect metric, regardless of the purpose of the collection

There is also opportunity to work with Heat to provide a tool to watch for variations in key values in order to trigger various reactions.
To summarize there are 3 tasks that OpenStack Ceilometer do:
Metering
Ceilometer Architecture 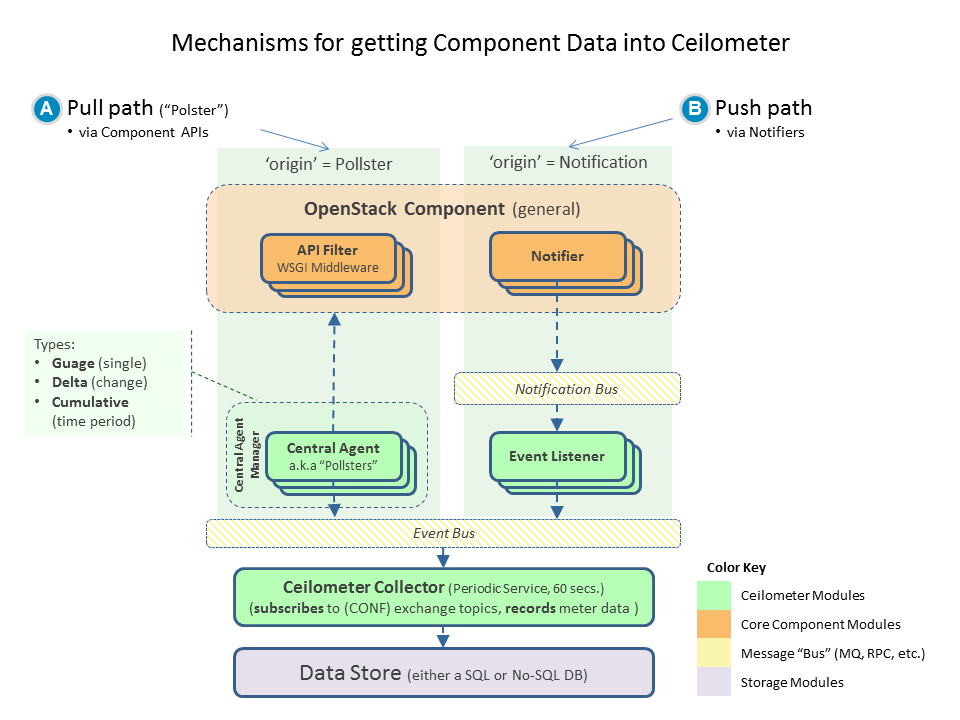 
This diagram show not only the components of Ceilometer but also a very important concept in metering/data collection - how data is collected.

There are 3 ways for data collection:
Bus-Listener Agent
Push Agent
Polling Agent
eNovance which is now part of Red Hat has a slide in SlideShare that depicts the work flow of Ceilometer: 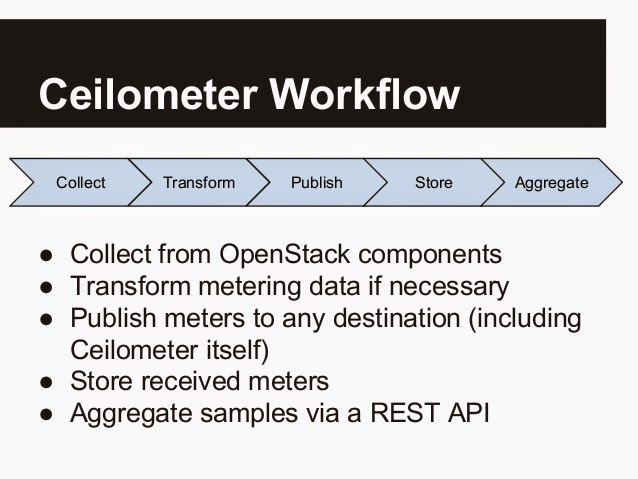 Once data are store in the backend database, they can be retrieved via the Ceilometer REST API

In Ceilometer data/meter is transformed and published to the receiver.

A single piece or a single set of data/meter can be used by multiple entities.  These entities that uses the data/meter has different requirement as to how the data is collected.  From the OpenStack Documentation it outlines 2 aspect of data collection that can pose conflict to the data depending on the requester of the data:

To solve this problem, come the multi-publisher allowing the same technical meter to be published multiple times to multiple destinations, each potentially using a different transport and frequency of publication. Three transports have been implemented so far:
This diagram show a single sample is sent to 2 of the transports - RPC and UDP which in turns publish the same data to 2 different target:


Alarming
This component is introduced in the Havana release. It allows user to set alarms based on threshold evaluation for a collection of samples. An alarm can be set on a single meter, or on a combination.

There are 2 actions that can be associated with an alarm:
The biggest use case for this is to integrate this with OpenStack Heat to provide autoscaling of resources in the OpenStack Infrastructure. For a more detailed description of how this work you can go to this eNorance blog.