How are OVS, OVN, OVSDB and OpenFlow related? 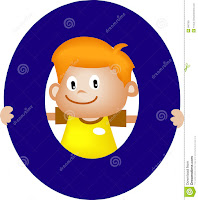 We have seen these OVS, OVN, OVSDB and OpenFlow in various technology articles.  Do you know how they are related?  Or are they related at all?

They all start with the letter O because they are all have "open" in their name.

With "open" in their name, does that make them related?

OVS, OVN, OVSDB and OpenFlow are related but not because they have "open" in their name.

OVS is the short form of Open vSwitch.  It is an open source software based virtual network switching module that can be deployed on hypervisor such as KVM or white box switching hardware.   Detail description of OVS can be found on it homepage and GitHub page.

A list of OVS feature can be found here.  The latest version is release 1.5

OVS is heavily used in OpenStack as KVM is the most deployed hypervsior for OpenStack while OVS is the default virtual switching module for KVM.

This diagram from OVS home page describe what OVS is: 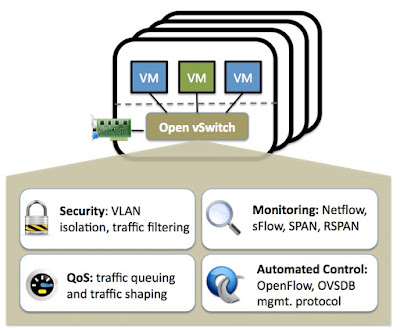 As you can see both OpenFlow and OVSDB is related to OVS.  Will discus this in more detail later in this post.

OVN stands for Open Virtual Network and is pronounced as "oven".  This is why the logo looks like the front of an oven.  It is a sub-project within OVS.

Back in March 2015, I have already written an article on OVN.  Please refer to this post for OVN details.

The heart of OVSDB is the database or schema that defines the configuration of the OVS as well as the QoS policies. Management module uses the JSON-RPC as the transport to communicate with the ovsdb-server module of the OVS. (note: JSON = JavaScript Object Notation and JSON-RPC is a Remote Procedural Call encode in JSON format).

OpenFlow is a protocol.  It is one form of  control plane for Open vSwitch and is defined in RFC 7149.

The main idea is to setup flow table that defines the action of a particular flow.  The basic action types are forward and drop with other optional/recommended actions such as flood, enqueue or modify field.

This diagram explains the Flow Table: 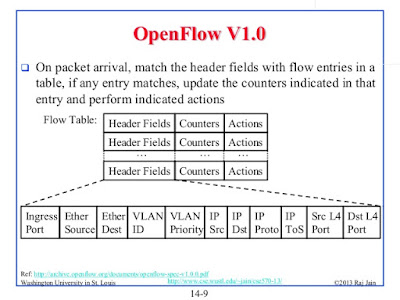 This diagram summarize the relationship between OVS, OVSDB and OpenFlow 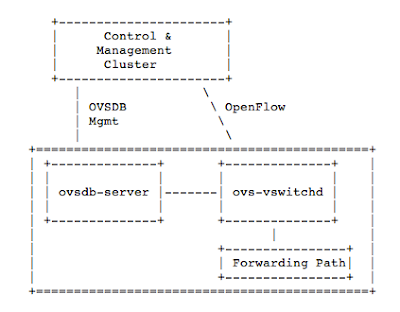 At this time OVN is part of OVS and uses the same interface ovsdb-server and ovs-vswitchd: 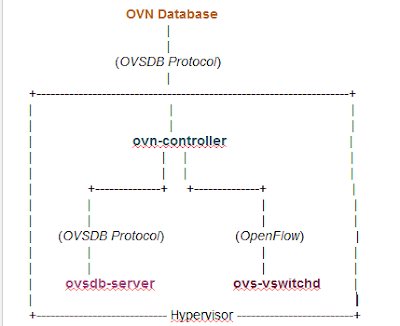 Both OVS and OVN are open source switching modules with OVSDB as the management plane and OpenFlow is used to program the flow from the controller to the OVS.