OpenDaylight - an alternative to VMware NSX and Cisco XNC.

OpenDaylight Project is described by this web site as:
The OpenDaylight Project is a collaborative open source project that aims to accelerate adoption of Software-Defined Networking (SDN) and Network Functions Virtualization (NFV) for a more transparent approach that fosters new innovation and reduces risk. Founded by industry leaders and open to all, the OpenDaylight community is developing a common, open SDN framework consisting of code and blueprints

According to Neel Jacques, executive director of OpenDaylight:
“The OpenDaylight community has taken on the monumental task of bringing together all the disparate technologies, thoughts and ideas around SDN and forming it into a cohesive platform. The community has made amazing progress in a short amount of time as you can see in this second release which integrates more functionality, apps and use cases. Helium brings us one step closer to having one common platform the entire industry can standardize on.” 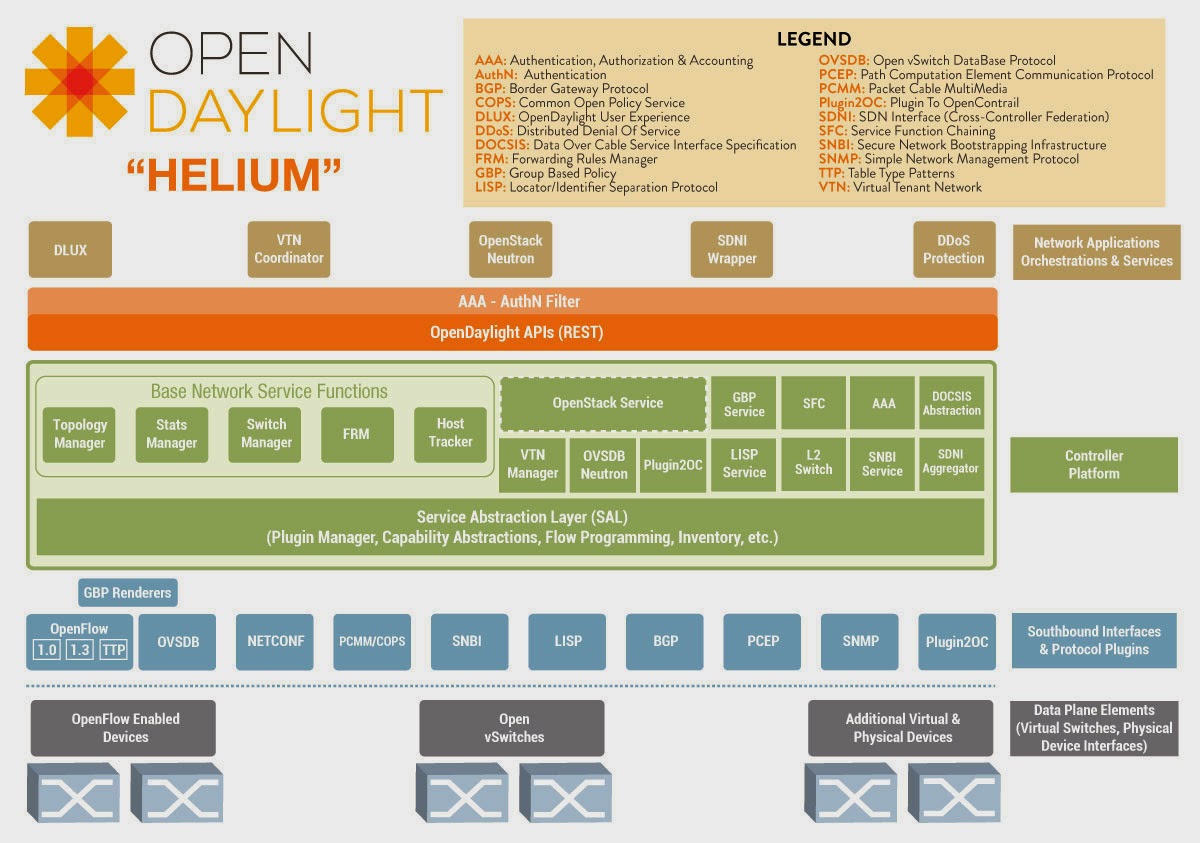 From OpenDaylight’s announcement “OpenDaylight paves way for innovation in SDN with latest open source software release”, I have summarized what’s new in the Helium release:

1. Apache Karaf
One good feature for the Helium release is that user can build on-demand combinations of components and features for OpenDaylight.  This is done by Apache Karaf which is a small OSGi (Open Service Gateway initiative) based run time lightweight container where different components and applications can be deployed.  The best feature in my opinion is the ability to check for component dependencies.  Remember the days how we install packages onto a Linux system before apt-get or yum?

Work is done for the OVSDB (Open vSwitch Database) driver to provide features such as:

3. Security
In the Hydrogen release, there is the Defense4All project for mitigating Distributed DoS attacks.  In the Helium there are 2 new projects for security:

In this article, author Sean Michael Kerner stated that “Security is a particular area of focus in the Helium release”.

Authentication, Authorization and Accounting
AAA has been around for some time and is a popular and widely used security architecture where user’s credential is authenticated and based on the outcome of the authentication process, access for resources are granted/authorized while accounting will record this process so as to provide an audit trail.

According to a Red Hat blog, AAA project provides:

In our case as mentioned on the previous section, the external identity service will be OpenStack Keystone.

Secure Network Bootstrapping Infrastructure
This feature helps to solve the problem of having to manually distribute keys for the different networking device to communicate with each other.

This page has more information about how this works.

Conclusion:
Besides, OpenStack integration and security both High Availability and clustering are important feature for the enterprise. OpenDaylight Helium is a big step forward from the Hydrogen release and hopefully more vendors will embrace OpenDaylight and provide this as an alternative to