VMware – from VM-aware to Application-aware


After catching up with what’s new in vSphere 6 this past weekend, I started to catch up with VMware’s latest announcements.  One of the latest announcements is “Project Bonneville”.  This is project is in the technology preview state and I am hoping that there will be some exciting new announcements on this in the upcoming VMworld 2015. 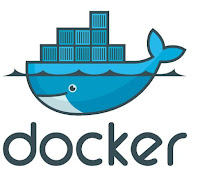 I think you are all familiar with this logo.  Docker Inc, is the company behind the open source Docker platform.  The Docker platform is an orchestration or packaging tool that allows application and their dependencies to run on container technology.  Container is not a new technology ad we can trace back the origin to FreeBSD Jails back to year 2000. Docker makes it easy for developer and sys admin to deploy application with container technology.  This is just perfect for DevOps as well as Microservices architecture.

Many of us buy things at www.amazon.com and it is very convenient especially if we also subscribe to the Amazon Prime services.  I ordered my “Mastering VMware vSphere 6” book from Amazon and it was on my desk in one and a half day.  In the pass the web sites for online shopping follow the LAMP stack model with Linux, Apache, MySQL and PHP.  Nowadays the with Docker making the container much more user friendly, there is a new way of deploying an online shopping website with an Microservices model.  The entire website is supported by a bunch of Microservices that has it specific function/purpose.  Each Microservice runs as a container and interface with each other.

Often time the general view is that when Docker/container technology is becoming more and more mature virtual machine will be phased out.  VMware, however, see this very differently.  Last year at VMworld 2014, it announced project Fargo (now shipped as Instant clone in vSphere 6 for rapidly clone and deploy of virtual machine) where it sets the direction of container at VMware:
VMware + Docker = Best of both worlds.

I had a blog post that talks about this and if you are not familiar with Docker or container technology take a look here as as start.

The foremost benefits of a VMware infrastructure I think will be the resource management capability such as vMotion, Distributed Resource Scheduling (DRS)  and built-in fault tolerance.  Monitoring and reporting capabilities will be another benefits.  Last but not least is the rich networking feature that comes with vSphere as well as NSX that support both networking and security for the VMware infrastructure.

Benefits of running Docker containers
These days, more and more companies are running Docker containers in the production environment.  As mentioned earlier, Docker containers are good for DevOps and Microservices architectures due to is lightweight footprint and minimal overhead which make deployment extremely fast.  Another benefit of a Docker container is that it bundles the application and all its dependencies into a single image and can be run on any machine as well as able to share the image with others with the use of a common accessible repository - Docker Hub.

Project Bonneville
This project in a nutshell is to run Docker container as a virtual machine on an ESXi host.

A picture is worth a thousand words and let's take at look at a presentation from VMware on how Docker fits into ESXi host: 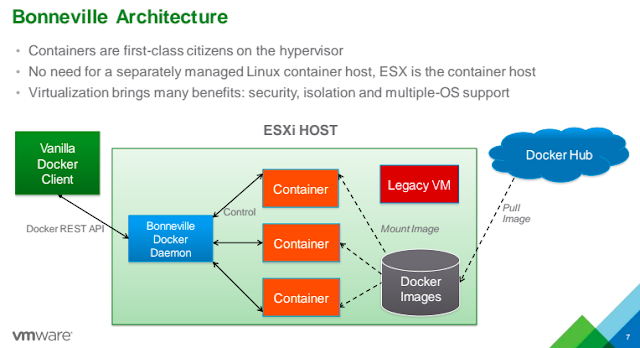 In OpenStack, the trend is also to run containers just like any other hypervisors in Nova compute.  There is also a OpenStack project - Magnum that integrate container orchestration tools such as Docker or Kubernetes for OpenStack users to deploy containers in the cloud.

Visit here and here for a more detail on Project Bonneville,

At the end of the day it is the Application that matters
I have mentioned this again and again that Application is the focus of an infrastructure because the main goal of every infrastructure is to deploy application for various business needs.  Email is a good example of application.  Different IT vendors will converge into an "Application Centric" infrastructure however their marketing department will come up with creative name to describe it.
Posted by Anthony Chow at 9:50 PM