I am a software developer and for a long time when I implement a feature SNMP support for the feature is always done last and sometime delayed to a future release.  Back then, functionality of the feature was the most important thing in my mind.  As I venture into server virtualization, I start to see the perspective of a system administrator or a network administrator.  Monitoring and reporting is very important and sometimes more important than a feature set delivered by the vendor.  Of course maintaining the five 9s of uptime is always the highest priority.

These days I am looking into NSX.  Derek Seaman has a blog post on “VMworld 2014: Future Direction of NSX” where he summarize session NET1674.  Chris Wahl has a post on NSX 6.1 (4.2 for the NSX Multi-hypervisor).

I came across an article with the title “The industry’s east-west federated solution”.

After reading the title, 2 questions come to my mind.  What is:

East-West Traffic
In simple term, east-west traffic refers to the traffic between servers in a data center.  There is another term – north south traffic and this refers to the traffic between clients and servers in a data center.  Traffic from client to the server will be northern bound traffic while traffic from server to the client is called southern traffic. 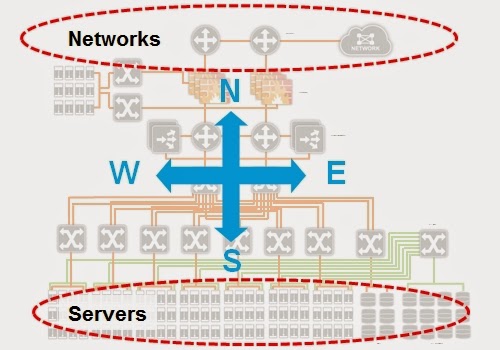 A Solution to a problem
First of all what is this solution?  What problem is this trying to solve?  The problem is that virtual network has not visibility to the physical network.  For a user or virtualization/network administrator this is not a big problem.  This will just be an inconvenience because there are tools to monitor, view and debug the virtual and physical network individual.  At the end of the day, user still has the tools to perform their job.

From the perspective of automation or orchestration, this is a big problem.

A Federated Solution
Why federated?  The solution calls for a federation of 2 products to solve the problem.  The 2 products are VMware’s NSX and HP’s VAN Controller which one of HP’s SDN solution.

As of this writing, I see on twitter that a few people had sit for the VCP-NV certification and a few already achieved VCDX-NV status and they we being introduced on VMworld 2nd day Keynote session.  The VCIX-NV is not available yet and this should be equal as getting a VCAP level certification and one of the requirements to sit for this certification is a person is a CCNP or CCIE holder.  This requirement shows that VMware is trying to get Cisco certification holders to get into VMware’s SDN solution.

When we look at VMware NSX, we can approach this from 2 angels.  Its capabilities and its components

VMware’s NSX has the following Capabilities:

VMware’s NSX has the following components

All the NSX components can be configured using vSphere Client, VMware command line interface (CLI) and REST API.
The REST API is essential for 3rd party software entities to interface with NSX.

This HP VAN SDN controller is recommended to run on an Ubuntu 64-bit server with 12.04 LTS.  It requires a back end database.  The recommended database platform is PostgreSQL 9.1.  OpenJDK 7 JVM is also required.

Integrating VMware and HP’s solution
The 2 companies has entered into a joint development of a solution that will combine the strength of the 2 SDN solutions that according to a white paper to provide customers unified automation and visibility of the physical and virtual data center networks, enabling  business agility and improving business continuity.

HP blog is saying the integration is at the control plan.  When I look into OSVDB, I believe this should be the combination of the management and control plan where OSVDB is for management similar to NETCONF and control plan is where the OpenFlow protocol resides in which is being use to program traffic flows.
This solution will be available in the 4th quarter of 2014.
Posted by Anthony Chow at 7:07 PM