VXLAN in the contemporary data center

Later on, storage virtualization has made the data center more dynamic/elastic where beside the virtual machines, the data can be moved around.

Virtual machines can move from one physical server to another server is very useful.  However, the limitation was that these physical servers have to be connected in a flat network (layer 2).

With multiple virtual servers running on a physical server allows for multi tenancy.  VLAN is a good way for traffic isolation among the various tenants.  The number of VLANs in a network is limited by the 12-bit field which is 4096 in which VLAN 0 is not a valid VLAN thus only 4095 VLANs can exist in a given layer-2 network.

To cope with the increased demand on the network from the virtualized data center the industry has come up with 3 different ways to alleviate the problems.  The most discussed technologies are:


I will describe and compare these 3 technologies in another post.  This post will focus on VXLAN which is one version of Network Virtualization.

How does network virtualization abstract from the physical network?  One way is to use the technique of network overlay where tunnels between end points are created on existing physical networks.  The most common tunneling protocols are:

Benefits of Network Overlay
The very first problem that network overlay can help solve is to extend the layer 2 domain across layer 3 subnets.  This resulted in physical servers are not confined to a single flat layer 2 network for virtual machines to move around.  With traffic tunneled between end points, it helps in traffic isolation among tenants.

Each overlay networks has its own network id and thus extend the 4095 VLAN limitation.  Furthermore, multi-tenants in the same data center can have the same private IP address.

What is VXLAN?
VXLAN (Virtual Extensible LAN) is a network tunneling technology by encapsulating UDP packet on top of a native Ethernet frame and transport over an IP network.

It was jointly developed by VMware, Arista Networks and Cisco.  The latest specification which is moved to RFC status also has contribution from Storvisor, Broadcom, Citrix and Red Hat.  The title of this IETF draft is “VXLAN: A Framework for Overlaying Virtualized Layer 2 Networks over Layer 3 Networks”.  This technology was first announced at VMworld 2011. Since then there are tons of articles about this topic on different technical magazine and blog.

VXLAN Terminology
The best way to understand a technology, in my opinion is to start from the terminology being used.  It provides a framework of what the important elements are for a given technology. At the very least we can type in these key words in our favorite search engine and start researching.

The following are in my opinion the essential basic terminology used in the VXLAN world:
Encapsulation
The term encapsulation is used in Object Oriented Programming as well as in data communication.  The idea is the same in both cases. The concept of encapsulation is to put one object into another object and send to a destination.

In the case of VXLAN, it is to put a layer-2 frame as the payload of an UDP packet and uses IP to reach the destination.  When reaching the destination, the packet is being de-capsulated.

I have a picture taken from the Cisco website that not only details the individual field of a VXLAN packet but also to explain the concept of encapsulation with color.  The yellow portion is the “original L2 frame” and is being put as the payload of an UDP packet as highlighted in blue.

VTEP plays a vital role in the VXLAN operation.  It is these end points that the tunnel is created so that the “original L2 frame” can be transported back and forth thus achieving the goal of layer-2 communication over a layer-2 (IP) infrastructure when entities are in different IP subnets.  One constraint that we have mentioned in this post was that vMotions of virtual machine is limited to physical machines that are in the same layer-2 network.

VTEP can be implemented in virtual switches in the hypervisors or it can be on physical networking device such as switch and routers.

VNI
VXLAN is about layer-2 segments as inferred by its name – extensible.  Traditional VLAN segment is limited by the 12-bit VLAN ID to 4096 per network.  With VXLAN it is being expanded to 16 million logical segments.  This is done by the use of a 24-bit VNI or VNID (VXLAN Network ID) to uniquely identify logical segment within a VXLAN network.

Each device in the VXLAN network is uniquely identified by the combination of VNI and the MAC address.

IP Multicast
VXLAN operates on a layer-3/IP network.  Tunnels are created between VTEPs. IP multicast was specified in the VXLAN specification to be used to simulate a layer-2 broadcast to find the location of the destination device.  IP multicast can be IGMP or PIM.   I will have to find out if one method is being used more than the other.

Cisco has a proprietary implementation of using unicast to perform this function.  It is being called the unicast-mode. 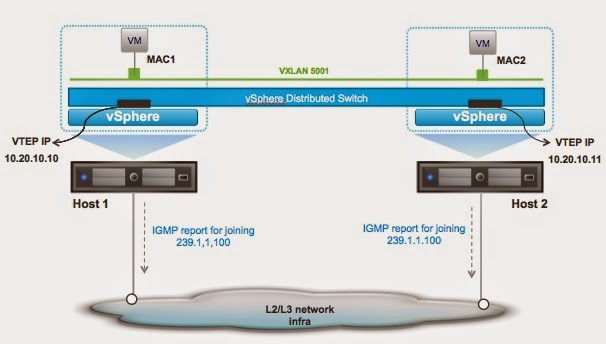 The above diagram that I have seen at the VMware blog explains the VXLAN operation very well:
When VM on the left wanted to communicate with VM on the right:

This is a brief overview of VXLAN in the contemporary data center.
Posted by Anthony Chow at 8:21 PM